“IS COPULATION COUNTER TO NATIONAL SECURITY?” – or - “An Officer and a Gentleman?”

CATEGORIES –
Prurience
Voyeurism
What gets people to read newspapers
Propaganda
The red herring
Official incompetence
Human rights denied
Rubbernoses
The biological imperative
Expectations
Put yourself (or your daughter) in her shoes
Make love, not war
Their hypocrisy
Our hypocrisy
Are they doing so badly in ’Ghanistan they need a diversion here? 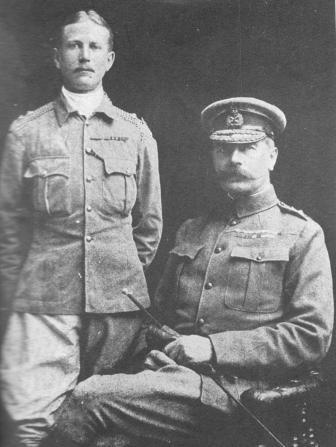 Image – Well, you asked for it. No way are we going to even mention the name of the young lady embarrassed by the last defence fiasco. Better we publish one that reflects the staff for what it is; as they say, warts and all. Here’s Lord Kitchener and his ‘aide’.
Cute, isn’t he, the aide? never would have stood for this sort of thing – besides which, he never could get his Box-Brownie to work.﻿
Author – A-Non-Farmer
Old men hate young people enjoying themselves.
Old men perpetuate institutions.
Old men choose like minded sycophants to run their institutions.
Sycophants run institutions the way they’re told to by their elders.
When the workings of institutions go awry it is never the fault of the old men.
Old men who have forgotten what it is like to be young always blame youth for their own shortcomings.
One thing old men never admit is that it is jealousy of youth that mostly burrs them up.
Old men have enough trouble getting up in the morning without worrying about scandal.
Yet old men might prefer the confusion caused by a bit of scandal rather than be brought to account for real bastardry and incompetence.
And so it goes down through the ages.
The ‘media’ is at it again.
Bored stiff by nothing to write about and censorship – yet something has fallen into their capable hands.
Trouble is that as usual they’ve taken it from their grubby, squalid little angle.
A few years back Defence was moaning about a certain lack of volunteers.
To remedy that they introduced the allegedly, non-discriminatory, ‘affirmative action’, principle.
At the back of the old fart’s minds was probably the idea that they’d attract a certain TYPE of young man and woman (and hopefully dislocate the preponderance of gays the defence forces have seemed to attract way back before was whelped).
Hell. I can see their ideal in my mind’s eye.
The sort of thing on those huge posters in for May Day.
Tall, healthy, sun bronzed co-ed idealists, leaning assertively forward, arms linked in common purpose – that sort of thing.
Yeah. As usual and just the same way they manage procurement programmes, they wanted an impossible ideal at bargain basement prices.
I’d say their good buddies in the Israeli Defence Force might’ve whispered in their hairy old ears too.
“Oyy, Ve’ve benn doing it for years now. The kibbutz, our common purpose against the foe.
Our young menn and vomen driving their tractors with a good Galil carbine clipped on the mudguard.
Vun week they are picking oranges; the next they are picking off Palestinians.
Iss good?”
What they failed to mention was that they’d spin a line of bullshit to anyone stupid enough to listen and that they’d had more than enough trouble with their cadres shagging themselves crosseyed for decades.
So what do these superannuated turkeys expect?
Stuff a warship full of boys an’ girls and send them cruising off to sea.
Even a complete idiot would see what will happen.
When have co-ed barracks NOT had tiny holes accidentally appearing in the walls?
But none of that is important.
Whoever first commented that “gentlemen never tell” it certainly wasn’t our media or those who okay the PSYCH PROFILE of young males admitted into ADFA.
I expect by now Angus will have had a spare five to think things through.
It would be ridiculous to segregate the officer cadets at ADFA.
He needs to nip the situation in the bud.
Once he takes the attitude that officers SHALL act as gentlemen then it shouldn’t take him long to work out who’s been acting contrary to that principle.
Oh bugger it why not just say it.
They tell me that there are six male officer cadets at Duntroon that are into ‘surveillance’.
There’s another who may or may not have set the girl up.
If I were Angus I’d have them doing their surveillance in Afganistan as private soldiers.
Then he could likewise deal with that officer who gave such kind advice to the cadet who was raped.
Then the Navy – then the mile high club -
Of course such action would be unpopular within the defence establishment and any defence chief who opened up such a can of worms would soon be out on his ear.
So, Air Chief Marshal Angus Houston AC AFC, we extend our very best wishes for your retirement full in the knowledge that you will do the honourable thing.
﻿
Posted by CALLIGULA at 10:27 PM