Categories –
Value judgement
Perception
Rationality
Self-assessement
Keeping up with the Jones’s
Would he go away if I ignored the prick?
Fatal mistake even thinking it - maybe he has a point after all?
‘Miraculous Mutha’ knew best
If ‘the Age of Reason’ is past – then what do we have now?
Is eugenics REALLY an option?
Who stole the milk money?
‘Sustainability’ – what does it mean?
Does the ‘elephant in the room’ need feeding?
Popular catch-phrases and applied methodology toward their extinction.
Topology – space demarcation/optimisation – interior design – making room for overlarge pets
Can’t the cat look at the queen?
What is it about some people?
If you invited him home would he drink all your booze, smoke your cigars - then still piss in your fishtank?
The ‘Alpha Male’ – should rutting behaviour be confined to his flashing ‘Bling’?
‘Situational awareness’ and its ever decreasing utility in the ‘’.
Is the ‘Alpha Female’ the ‘elephant in the room’? 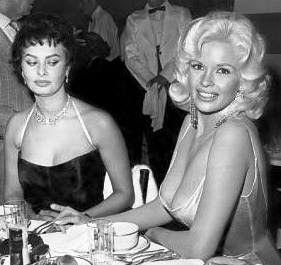 Image – Jealousy or contempt? Attitudes. The camera catches all. Meanwhile what the hell does she do with her olive pip?
Author - Arthur
‘Miraculous Mutha’ was first, knew best, and ---- the rest.
Her advice to the lovelorn in ‘Easyriders’ magazine had us all chewin’ the carpet in the nineteen seventies.
Dorothy Dix wasn’t in the race.
‘Miraculous’ wasn’t into feminist assertiveness ‘cos she refused to lower her status.
She was just GROSS.
Unlike Mussolini’s niece just thinking about it wouldn’t be enough. She’d know where to spit the pip of her martini olive.
She won the hearts of at least two generations of bikers around the world.
Don’t worry, I tried googling her and she’s out there if anyone remembers her but apparently Conroy’s goons have been at Australian biker sites already and we’d go the same way if I attached the one page of her Q&A I found overseas.
But what the hell - http://45dgree.com/?p=2518
Hey. Maybe Conroy was advised that ‘Miraculous Mutha’ was ‘the elephant in the room’?
http://www.phrases.org.uk/meanings/elephant-in-the-room.html
Then OGRI arrived.
http://www.paulsample-ogri.co.uk/Strip%20cartoons.html
http://www.paulsample-ogri.co.uk/SlideShow_assets/SlideShow.html?lang=en
http://www.telegraph.co.uk/motoring/4750371/Legend-of-Ogri.html
Gross they may be but nonetheless someone’s children.
What made them ‘acceptable’ back in the 70s but not in this century?
Is it maybe because their creators introduced us to reality?
Did they broach subjects that were kept ‘under the carpet’ by officialdom in the past?
Weren’t they pointing at those ‘Elephants in the Room’ – dealing directly with societal taboos by tilting stereotype toward complete absurdity.
There’d be more practical counseling in one of Miraculous Mutha’s columns than within lifeline’s entire philosophy.
Her rather Hobbsian attitude to life was reflected back to the reader in ways that made plain that if life was going to be nasty, brutish and short it’d be those trying to cause herself and her correspondents grief who’d cop the flak in bucketloads.
Miraculous Mutha should be required reading for bullied schoolkids.
Not only could she tell you how to turn the other cheek – but which cheek and how to flash it without being caught.
Though contemporaries, Miraculous was a girl while Ogri  was born in the .
While Miraculous used words to convey her message Ogri more often made use of action.
As the editor of ‘Bike magazine’ said  in 2001 – “In the Seventies he reinforced attitudes, now he creates them.” 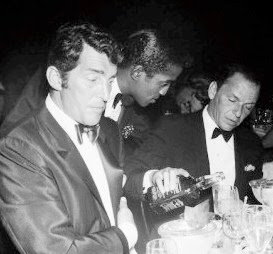 Image – ‘Strike me pink. Where did that olive pip go?
So what is it about these legendary characters?
They broke all the rules from first publication.
Miraculous would definitely be up on an obscenity charge these days in .
Maybe Ogri would make it through if he had a shave, bought a car and demanded all the chics in his cartoon put on a bra.
But there’s probably not much dough to be made cartooning for the ‘Accountant’s Quarterly’.
There’s little chance they’d be given a slot in any wishy-washy modern publication.
Maybe it is a reflection of how completely dumbed down our society has become.
, they call it.
A mob of bludgers expecting a careless government to attend to every annoyance and outlaw everything that distresses them.
End result – remarkably like bullying – everyone looking, acting and thinking the same – not because they want to – but in order to avoid attention from the officially appointed bully.
Well, Arthur will tell you something for free.
Many years ago I was stuck with a traineeship at a certain ‘workplace’ up here in God’s own country.
Just like our illustrious defence force there was a ‘culture’ of what is called bullying and bastardization.
Nine hours a day five days a week and it was like being stuck in the ape’s cage in a zoo.
It was an ‘occupational tradition’ to treat trainees badly to the extent that even the decent blokes there ‘turned the other cheek’.
Maybe schools should have run programmes in pre-vocationary foul language, weirdness and borderline sexual depravity.
But they didn’t, nor did I have the slightest clue that a group of supposedly responsible and highly qualified men would not only condone but actively join in with what these days would be condemned as criminal.
As I write this the defence minister and every other Tom, Dick and harry are yammering away on the radio about Duntroon still.
And the BIG question remains – why should anyone ever have to put up with that sort of shit?
So what, you want to know, is any of this about the title of this article?
Well, clearly, I didn’t have a clue what madness was waiting in store for me when I first started work.
If I had known I wouldn’t have gone near the place.
A bad decision made in direct result of inadequate knowledge followed by more bad decisions resulting from being contractually bound to that looney bin.
The ‘Dunning Kruger Effect’.
Do sane, well adjusted, adult males gratify themselves by perpetuating a regime of bullying and bastardization?
No.
But narcisso-sociopaths would.
So what the hey is this all about – this Miraculous Mutha and Ogri crap?
Simple. Round about the time I’d just about given up wanting to live I discovered these two fictitious characters.
Miraculous told me how to out-gross those slimebags at work.
She provided me with a succession of such astounding ‘put-downs’ that’d leave those dorks black in the face and speechless.
She taught me how to swear like a longshoreman.
She let me know how to get even with the turkeys
And most of all she let me laugh again. 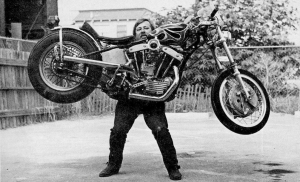 Image – ‘Look ma – no hands.’
Ogri?
A role model?
I seriously doubt it.
Ogri was faaar too radical for most of the local bikers.
Mind you his scooter rattled and leaked as much oil.
No. It was more like in this land of pretend conformity populated by the sort of shithead a bloke had to endure at work - there was, at the end of the day, some escape from their petty churlishness.
Yeah – two dimensional cartoon characters despised by authority helped me laugh and escape for a few seconds from their brutality.
Without them I’m sure that many of us back then would have gone completely ‘DOOLALLY’.
Further reading -
http://www.nannystate.com.au/
http://en.wikipedia.org/wiki/Doolally
http://www.guardian.co.uk/world/2003/sep/22/gender.uk
Posted by CALLIGULA at 1:40 AM