“THE GENIE IN THE BOTTLE” – or who’s gonna get to uncork the Colonel? 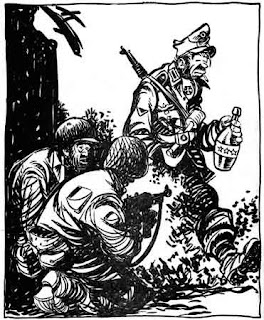 Image –
“Don’t startle ‘im Joe – it’s almost full”
With the greatest respect for the memory of a great artist – Bill Mauldin – who, were he alive today, would see yet another generation of soldiers fighting over valuable resources for scurrilous, venal, reasons at the flimsiest of excuses.
We’re idiots at Calligula’s Horse.
We sometimes contribute comment to other weblogs.
Often, hours of work results in someone telling us that we know diddly squat about the subject – that our poor effort is incomprehensible/ indecipherable – that we’re paranoid conspiracy theorists – or just plain old-fashioned trolls.
So while having yet another editorial meeting at our new, flood-proof, workplace (six sets of water-wings installed in the first aid cabinet) Django was leafing through some folios of political cartoons.
“Here it is” he exclaimed “I’ve been looking for this one. All this hate going on in and the need for an illustration for the article.”
“But what has that to do with ?” – asks A NON FARMER.
“Yeah, been smokin’ dried banana leaves again, have ya?” – Arthur enquires helpfully.
“No blockhead; it’s the same old game, only with a new twist” – replies Django.
“Look at this cartoon. A couple of American troops trying to figure out how to capture something they want. If they startle the enemy he drops what they want.
They have the power to kill the German soldier if they need to but they’ll probably lose the booze.”
Arthur shrugs dismissively – “So what?”
A red faced Django glowers at Arthur – “We pay you an allowance ‘cos you make a good cup of tea, Arthur – the other reason is that if we can get an idea into your head and publish it on the strength of that there is no excuse – no bloody excuse at all for some dolt out there in cyberspace to say he doesn’t understand what’s been published – okay?”
NnnnnnnnnnHhhhhh !?”
“Arthur, just keep your cool and pretend those two seppo grunts in the cartoon are in modern . The German is really a Libyan soldier loyal to the colonel and the bottle in his hand is full of Libyan oil – in fact the bottle holds ALL the Libyan oil.”
“Couldn’t it’d all spill out !” – bawls Arthur.
“Jeeesus wept Arthur – it’s a POLITICAL cartoon – an abstract graphical concept. The bottle is something the Yankees want. Bill Mauldin probably intended it to mean that when he first drafted it.  Two against one from a situation of surprise represents the against then. The bottle represents what the want from the German nation. The problem is that the German nation might decide to smash the bottle in order to deny the US that resource – or even worse – there might BE something in that bottle that, if frightened too much, the German nation could use against the US and allies.”
“Ooohh, like what Gaddafi’s likely to do then in when he gets too pissed off.” – contributes Arthur.
“Yessss Arthur” – as Django collapses in frustration, sobbing over the table.
Transcript of comment, Calligula to John Passant - http://enpassant.com.au/?p=9688#comments
“A few weeks back I wrote –
“If anyone bothers to parse my words they’ll come to understand I do not want to see North Africa once again a playground for armour, nor any other play of the last cards of another collapsing empire squandering millions of lives.”.
Yet it has happened.
I am half way through reading “The Boer War” by Thomas Pakenham.
It ain’t your schoolboy history despite featuring Powell.
Amazing parallels.
Empire in decline – resources – strategic location – a need to foment disunity amongst a stratified populace – and a desire to wage opportunistic war – a few amoral characters placed well enough to bend history to their whim.
Gaddafi now, like Kruger then, a central player about to be run out in this innings of the ‘Grand Game’.
Nothing ever bloody well changes, does it?
Paul Kruger in acting like some Gaddafi/Bjelke Petersen composite – a balancing act playing one major power off against the other – meanwhile treating the majority of his populace like serfs in his satrapy corrupted beyond recall.
Oh yes – Kruger’s Transvaal – operationally, somewhat like and attitudinally, very much – too much like , .
Joe Chamberlain pretends to want moderation while his Viceroy Alfred Milner (the model for John Buchan’s protagonist for evil, “The Thirty Nine Steps”), in collusion with what we’d call ‘capitalist resources interests’, schemes for war.
Does British public opinion demand war?
No.
The reverse in fact. An apathetic public have to be driven toward an opinion by the press.
As in , the chooks (Joh’s name for the press) have to be fed in order to tell the public what they need to think.
One or two rash actions and the odd error of judgement on Kruger/Gaddafi’s part and – Bingo, war.
Any of this sound familiar?
The worldwide yearly budget of British Army intelligence in 1898 was a piddling 20,000 pounds and the War office didn’t even have a casebook of operational scenarios for war in . There were months of thrashing about before British soldiers were properly mobilized – similar to the build up before Gulf Wars 1 and 11.
So come on John –
Tell me how it could be this one outstandingly remarkable difference between Kruger’s treatment and Gaddafi’s – that the no fly zone was declared only a few hours ago and already he’s being stonked comprehensively?
Only an idiot would reject the obvious – that decisions have been made, funds/ resources/ manpower allotted and deployed months ago and dedicated to Gaddafi’s fall.
But meanwhile the neighbouring states of and needed to be neutralized before the master stroke.
Gee, they’re getting bloody good at this sort of thing.”
Further reading -
http://en.wikipedia.org/wiki/Thomas_Pakenham_(historian)
http://catalogue.nla.gov.au/Record/2990902 ﻿
Posted by CALLIGULA at 1:56 AM