“BLOODY MINDEDNESS IN QUEENSLAND” – or “How to keep the press and environmental scientists happy.” 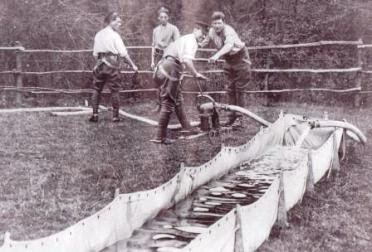 Image –
Spy camera capture – preparations for an invitation only, Q-Gov garden party/press conference. Smith’s ™ Crisps, Palm’s ™ Condiments and straws - out of camera.
has always known how to give the public the best angle on what their wayward and completely corrupt government is up to behind the public’s back.
Sometimes it can be a real chore trying to explain how a drug crazed cop might keep tazering a bloke until he was black in the face and stone, cold dead.
When this sort of thing happens our government calls in the press for a conference.
Government, on these occasions, pulls out all the stops to ensure – to absolutely ensure the press are completely au-fait with the situation and satisfied beyond doubt that the government has done no wrong.
In this regard an old, tried and true process first established by the illustrious Bjelke Joh Petersen is brought into play.
He called it “Feeding the chooks”, gave them a line of guff along with mucho really good food but nothing more alcoholic than orange juice (back then booze and smokes were cheap but good, really tasty, food was almost non-existent).
These days the reverse applies, what with wowser governments and absolutely zealot NGO lobbyists – when the press absolutely have to believe (like when their jobs depend on it) what government says – then they definitely need a good drink.
Where was I? – Right. The above image was taken just before the police minister was explaining to the press how a dead person kept on being tazered until smoke was coming out of his ears..
Now, admittedly the constable might have gotten away with his excuse of ‘bad training/he hadn’t read the manual’ – except for the fact that he’d flattened the batteries in the third tazer he’d borrowed off his colleagues before he ran out of hormones and puff.
Indeed, it is times like these the press conference and the government trough pumped full of ‘rare single malt’ moonshine whisky comes into play.
Well, other than that there’s not a lot left to say about that subject.
Everyone knows that Q-Gov is corrupt and the press is compromised beyond recall.
But now, dear reader, you know the extent of the collusion.
Imagine what it looks like in the cold light of dawn – that trough lined with the supine, twitching bodies of once proud, incorruptible journalists fighting the fog and trying to remember what was said – what THEY’D said the evening before.
As for the environmental scientists – they’re happy with their lentils and cold bean soup.
They care less about the compromised journos killing themselves living a lie.
No doubt they’ll pretend that the coal seam gas fiasco in won’t destroy our best agricultural land for all time while they pray that Gillard will prevail with her tax on nothingness as stupid and potentially as destructive as Dutch tulip futures and the South Seas Bubble.
For other uses of tazers in , see - http://calligulashorse.blogspot.com/2011/03/another-coup-in-australia-andor-dowager.html#comments
﻿
Posted by CALLIGULA at 3:48 AM