“A CHANGE OF PACE” or A HAT FOR THE OCCASION

Categories – Militaria – Headgear – Headwear – Hardware – History – Alternative History – Pickelhaub – cigarettes - German Soldiers – Lucky Franz – Unteroffizier Lincke – Feldwebel Gross – General Georg von der Marwitz - Australian Soldier – Lance Corporal John Golightly – Sir John Monash –
Provenance – fraud – misrepresentation – misappropriation - hearsay - make the evidence fit the crime – everyone does it these days – if there’s money in it - why not run with the play – Finckel of Rastenburg – accoutrements, de rigeur
Author – Django Reinhardt, Editor
Sometimes you can search and search and never do any good.
What is a collector’s hat worth?
The average WWI  German spiked leather helmet (Pickelhaub) in good condition is ‘offered’ on the net at prices ranging from a large dent in your pocketbook way up to a small fortune.
It seems the price varies considerably with the rarity of the object and whoever the hell is selling it.
There are a few specialised dealers and there are a very few very specialised dealers (usually British) who can command prices that would bankrupt small nations. 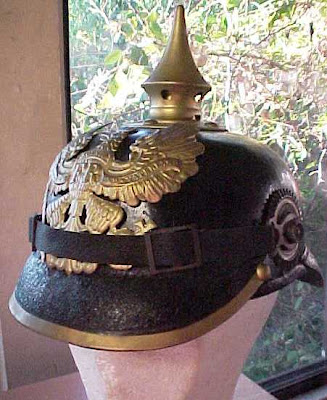 Image – Pickelhaub Modell 1915. A Prussian sleeper, apparently a private purchase going by the gilt furniture and Prussian badge, overall quality, diminutive head size, the additional inner crown straps/head support and the lack of regimental markings.
This leather helmet does indeed have what appears to be plug repairs of about rifle calibre (303?) size in the crown though one at the front is behind the undamaged Prussian helmet plate.
How that happened , nobody alive today could possibly know; though it always pays to remember that truth is always stranger than fiction.
Then there is the literature. A symbiotic industry has sprung up beside the collector’s market.
Specialist authors and publishers not only get their rocks off churning out endless numbers of very expensive superbly illustrated books jam packed with pikkies of all manner of ultra rare collector’s items that the average Joe can only dream about – but the sadistic beggars also manage to disclude any mention of your pride and joy from that one thousand picky, full colour epic they’ve just sold you.
And collectors belieeeve these books.
If it ain’t in the book then it don’t exist, is made up of leftover parts, or is counterfeit.
Unless of course, it has ‘provenance’.
Now, provenance these days is a thriving industry.
A ‘consultant’s deed of authenticity is good but usually costs more than the item being flogged off.
Photographs are useful but increasingly doubtful in the age of computer graphics.
Paperwork is great and as far as militaria goes, the odd bloodstain not only impresses but helps cover typos.
Something like –
“To whom this may concern –
Trusting you will have many years satisfaction from my hat.
I bought my Modell 15 Cadet’s/Underofficer’s, private purchase pickelhaub from Herr Otto Finckel, gentleman’s outfitters of Rastenburg in March, 1917.
Please note that it is of a rather small head size since I was not very old when I signed up for the Prussian Infantry (73 Fusiliers) before I was conscripted.
Vati was assured that by volunteering I would have a depot job, as they say, ‘for the duration’, which is why my pickelhaub was a private purchase with gilt fittings  all de rigeur as to my regimental status.
As it happened that proved not to be true and suddenly I was transferred to a quiet spot on the front near a place called LeHamel and arrived there on 1 July just in time for a party.
Unfortunately for me some very aggressive Australians crashed the party and that is why my pickelhaub has these .303 sized holes through it, front and back, only slightly off centre.
Please be assured that I was not in the least impressed, what with not even having time to pay my respects to Uncle Georg.
As it proves, Feldwebel Gross had it right when he told me in no uncertain terms that the shiny gilt finish on my ‘haub would ‘draw the crabs’.
Gruss Gott –
Franz Lincke Uffz. KHq, 73 Pr/Fus
PS – I have had this letter prepared on the off chance that my expensive custom battle bowler having fallen into enemy hands, may float about for a century or so, after turning up on some far away foreign shore and be sold for a packet in the 21st century.
I realised this even as I took my shiny new possession out of its box and thought – ‘now, this needs provenance’.
But as it happened that hung over Aussie retrieved my ‘haub next morning. I helped him patch it and ‘im ein augenblick’ swapped him this letter of provenance for a packet of ‘coffin nails’.
PPS – I had best mention before the new owner gets turned off that I was not wearing my shiny hat when it was shot by that Aussie.
Far from it. He captured me, took a ‘shine’ to it and as they say, ‘pinched’ it, to my disgust. Then he got drunk and used it for sighting his rifle.
Oh, before I forget, the bloodstain on this letter. Cut myself shaving.”
So there you have it, ‘provenance’ of a sort.
I could have it translated into German and handwritten in faux gothic script with diluted Indian ink on a scrap of old paper.
A few dribbles off a meat tray, the careful use of a micro-wave oven and a few judicious waves with a hot air gun would have it looking more genuine than any original.
Is that what the flash dudes in those glittering emporiums mean when they say the things they do to the ‘Right Customer’ in order to sucker a few more thousand out of them for someone else’s second hand trash?
In far too many cases – yes.
But if that sort of thing happens with antiques and militaria, used cars and just about every field there is – then how come it doesn’t happen in politics and the professions too.
What makes them exempt from the temptation to gull people?
And once a person has been gulled and ripped-off – isn’t it always the temptation for them to play along and not expose the fraud in the hope that they can recoup their loss by selling on their mistake to another innocent punter?
Isn’t that the way of the world?
Isn’t that politic?
In fact hasn’t that been politics through the ages?
And now they want you to pay a tax on hot carbonated air?
Oh don’t worry, like that funny hat, the co2 exists.
It’s just that in exactly the same way as the hat; the truth is unknown about the co2 and while people choose to invent stories plausible enough to the gullible – the bullshit will replace the truth for every customer thereafter.
It will not be carbon being traded but the false provenance tacked on to the package for no other purpose than to fraudulently create an inflated and escalating price.
They know this now but as I said – they’ve been gulled – now they’ll be ‘politic’.﻿
Posted by CALLIGULA at 1:09 AM