In the midst of writing this the news of the disaster in Toowoomba and through arrived.
The first reaction after the shock was to decide whether or to publish the following article at the risk of causing more grief for all those who have already suffered too much.
Clearly once our weather improves the replacement and repair of our infrastructure and homes is going to take years and cost billions.
Clearly if that massive task is undertaken without consideration for our weather and the mayhem it has created we’ll all be facing another butcher’s bill and another every time we experience a patch of foul weather.
Some might deem it unfair to criticize those in office now when stupid decisions were made by those who preceded them. Those same might likewise not grasp the concept of continuance of governance.
But the elect and those alleged professionals employed by them in government are required to understand and abide by such concepts.
Instead, the populace nowadays face silence, obfuscation, hostility, and increasingly often, when that fails, covert action whenever they attempt to place fact before the nabobs.
A casual scroll through the internet will demonstrate that a reasonable number of Queenslanders are convinced that certain of our past masters and decision makers managed to retire and hightail it out of jurisdiction in the nick of time.
Perhaps, in order to avoid embarrassment, it might be best if some of the present crop did the same.
And since the big mistake mentioned below was signed off and approved on the watch of a set of past masters and decisionmakers then built and put into service by the present lot in both state and local governments the resultant errors are both cross-jurisdictional and chronically compounded.
Which is precisely why we maintain the concept of continuance of governance within our alleged democracy. 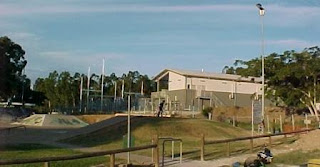 Image 1 – the submarine sub-station on a dry day. Note transformers and heavy gauge switchery behind control room, While not arcing and sparking underwater in this study the thing is still quietly irradiating the kids playing at the council built recreational facility immediately next door.
Perhaps council thinks non-ionising radiation is character building?
Or are they managing a covert environmental health study?
It has been an interesting few weeks at the office – if you call staring at mold growing on the walls, listening to confused, contradictory radio bulletins and helos flying over all day interesting.
Even Arthur had to park the Hardly Driveable in deference to the lack of navigable roads.
So what happens in our neck of the woods when everything goes underwater?
Firstly City Hall opened up its doors to those flooded out of their homes.
I understand that those unfortunate enough to be in that situation were offered a cup of tea or coffee.
Then for some reason the ever popular premier of Q. came back from holidays in the nick of time to visit town coincident to the arrival of a no-nonsense, fact seeking, Prime Minister.
Must have been a close call, publicitywise, that.
Mind you there is one of the ‘Emily’s List’ set who was conspicuously (and probably fortunately) absent until the drama was over and all the hard work begun.
Indeed, during the first several days of the crisis, while just about every other mayor in Qld has been flat as a lizard drinking, sleeplessly manning the barricades and purposefully egging along the citizenry with their war against the elements – our beloved mayoress had been absent without leave.
But perhaps in a perverse way she’s smarter than we give her credit for – 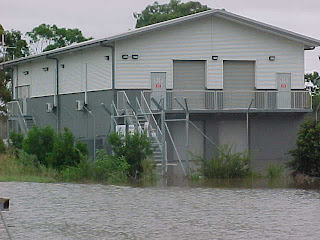 Image 2 – 29/12/10. Whoops. See, I told you so. Low flood level and the control room floor is already awash, the kids have traded their skateboards for surfboards and are happily paddling around something sounding like a million electric toasters being dropped into a swimming pool. Note, no birdlife.
Must be difficult to come back from a holiday in when you know you’ll be confronted by the sort of thing shown in the pikkies here.
After all you’d know your administration team definitely has its finger on the community’s pulse when they sign off approval for construction of a massive electricity sub-station below known flood level on an inner city flood plain.
‘But what the hell (she’ll think) all that was approved before I won my raffle for mayor.
And ex-premier Beattie was the man in charge when the project was approved.’
Which is just another of the tiny defects in the makeup of this ‘mayor’ – not the tiniest clue about the concept of continuance of governance at all.
But other than the fact of the total absence of correct process in governance as has evolved in modern (as the eminent Mr. John Passant put it to me “the inadequacies of government divorced from the people “) there is the ongoing detriment and continual risk to life and limb caused by this sort of stupid decision.
Aside from the matter of flooding the installation - which might have been remedied at the relatively trifling cost of a little more landfill under the foundations – there remains the spider’s web of underground (now waterlogged and underwater) 11 kilovolt cables leading out from this facility and the total lack of dry-shod access to any of it when wet.
To make that plain the Ergon fellows stood at the edge of the floodwaters on 29/12/2010 but made no move whatsoever to approach their new ‘jewel in the crown’.
Obviously they are savvy enough to agree with their boss that “electricity and water don’t mix”.
Nonetheless there are other concerns even when this installation is ‘dry’.
Kids are curious and quite agile and so are some drunks.
Which in the opinion of the team at Calligula’s horse two very good reasons why it is such a bloody stupid idea (even when its not underwater) to have the best part of an acre full of megawatts of raw power immediately adjacent to a kids playground and just over the road from a pub. 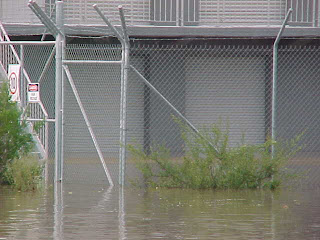 Image 3 – 30/12/2010, Photo taken from footpath at pub across the road.  Comparison with image 2 illustrates that there is at least ane half a metre of water sloshing about in that control room and around all the high tension equipment behind this building.
Note, water height approximately same as past floods.
Note, buzzing, crackling and popping noises emanating from sub-station clearly heard from photo staging point and louder than previous day.
Note, no birdlife.
Conclusion –
We tried to contact the electricity people about our concerns.
Standard operating procedure/spin/damage control was adopted when the young bimbo employed for such occasions offered a few phone numbers that mostly didn’t work.
We did receive a call a few days later from some electrical safety outfit attached to the Justice portfolio.
He suggested that the noises we heard might have been birdlife displaced by the floodwaters.
Would an operative of our illustrious state government lie or mislead?
On the strength of his advice I have forwarded an e-mail to the great naturalist Sir David Attenborough – title – “New species, exploding ducks” – and have included a copy of this article.
I anxiously await his reply.
If there is anyone on the face of this planet who could rule out exploding ducks as the cause of funny fizz, crack, pop noises coming from electrical power stations - it has gotta be him.
Posted by CALLIGULA at 10:55 PM