- SOMETHING HAS TO GIVE -

Caption - Caught by our spy camera – somewhere in QLD
Alternative title - “KILLER ROBOTS R US ™” –
Someone once told CALLIGULA when he was a little boy that the nation he lived in had certain freedoms – of expression – to associate – of religion or belief – to work and enjoy a living – that sort of thing.
Then as life progressed in this sunblessed land a few events happened to prove that wrong.
It seems that not much happens to the majority of the population so long as they keep their noses to the grindstone according to the BOSS and paradoxically, keep that same appendage ‘clean’, according to – well, you know who.
But if a person is cut of a different cloth: gets frustrated working for bosses in a region that is in any case collapsing industrially and can’t stand pub beer after work, the TAB, or footy/cricket on hot weekend arvos – then something has to give.
This is about something that happened to one of Calligula’s pals up in .
A story about how a decision made by none other than George Bush senior can put a Queensland engineer on the dole and a few years later his coming so close to being libellously ‘outed’ by ‘Four Corners’ as a member of an illegal religious sect and part of a network clandestinely manufacturing ‘Killer Robots’ ‘somewhere in regional Queensland’.
“Oh dream on. How could a bloke get into so much hot water.” – you might say.
Well, read on and find out. Next week it could be you.
Here goes –
If you, dear reader, had been working about ten hours a day at a fairly intensely multi-skilled engineering job manufacturing an amazingly innovative line of park leisure equipment; then you’d be immensely cheesed off if G.Bush sr. arranged for you to get the sack.
“Ohcomeoffit – whadalotofrot.” –
Some with no idea of cause and effect might say that but when dear George attacked one of our best wheat customers, a Mr. S Hussein in Iraq our dollar went on a downer and, if you remember the price of fuel went to the roof.
Now if your major customers are local councils ( a group known for their fuel consumption habits) – something has to give.
In this case they reneged on their agreements to buy park equipment in order to rebudget for that fuel increase.
The President of the couldn’t have arranged the sack much quicker for our boy if he’d phoned up personally.
Faced with this circumstance and a total downturn in his type of work he had to apply for the dole.
Things looked reasonably grim but not being one to give up our protagonist applied his brainpower towards alternative income streams.
Being too old to enlist and not interested in crime - an opportunity that arose and a family meeting about that soon had him contacting a few government agencies tasked with addressing Australia’s ‘changed circumstances’.
One of those was the Defence Department.
And something DID give. Our bloke gave years of his life and thousands of dollars towards establishing a registered and approved business developing equipment for the defence and security of . 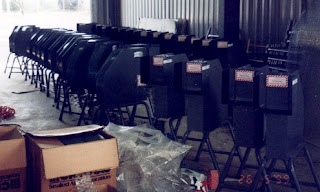 “Well, he’d have to be a bloody idiot, wouldn’t he?”
Oh yes. I reckon he’d agree with that sentiment now.
In a previous article, “Ground Zero”, the reader can find some more information – about Peter Reith and how his sort can actively help George Bush stuff up a bloke’s life.
That article dovetails with this one inasmuch as it relates to the products shown here in image.
Let him put it in his own words –
“We went through defence ministers and ‘senior contacts’ in ‘appropriate agencies’ like boiled asparagus.
They were always ‘out’ when they were actually in and ‘in meeting’ or something when they were out on the piss , or something.
Otherwise they were ‘under a cloud’, just retired, on leave – or ‘the chair’awaiting a new occupant.
Meawhile we were – ‘out of our depth’ and despite the solid documentation and information we gave them our industry capability was ‘not deemed to be possible in ’.
Which is strange because none of our export customers said that about us supplying them.
There is a ‘learning curve’ for these things. It’s possible to make a graph and easy to cross reference and collate documents in the way CentreLink, say, is supposed to do.
When you do that the true picture is staring you on the eyes.
These days you look at that and you see when their corruption kicks in.
I used to laugh at those yarns about blokes being ‘visited by the man’ because they invented the world’s best carburetor or something.
Now I know better. It happened to us.
What really pisses me, though, is that I once believed the press were there to support Australians and make injustice public.
I contacted the press about what was being dumped on our heads and was told politely to go and get stuffed – every time.
Then out of the blue comes this e-mail warning me that this ----- ---- McClymont is ‘investigating’ us.
What for? Bloody poodlefaking or something?
So I googled her and some key words in the text of these mails.
It was clear she was setting the Exclusive brethren up as an extremist sect illegally funding Jackboot Johnny’s 2007campaign.
I contacted HER and the EB’s representatives – but let’s talk about McClymont.
I put my situation to her – a lapsed Anglican just making a living who had been helped for a time by some absolute gentlemen and women of another religion but in my industry.
The single-minded dill didn’t want to hear that. It mustn’t have scratched her brittle intellect or fit her intolerant picture – her fixation or whatever.
The point is if she’d had half a brain and bothered to listen she could have been given some info to sink Howard without chasing up silly little sidelines from disaffected employees on the internet.
Yep. The intrepid investigative reporter must have picked up the same sites I had.
Some poor bored sod of an employee must have heard us joking about how the weapons clearing stations out on the shop floor looked like a herd of beasts – or maybe, ha-ha, quadruped killer robots.
I guess the rest would have been more trouble for us if that GreensWatch mob hadn’t given me a call.
Finally, I’d like to say this.
When I contacted McClymont – for that matter whenever I’ve tried speaking with her type before or since, they all project the illusion that they are better than us – that we can all just be bent to their will and the truth be damned.
After all, if you can’t get the suckers to publish the truth what chance would a peasant like me have getting them to publish a retraction and apology?
Perhaps I should have kept my trap shut or fed her a line of guff.
Might have been amusing to see something on TV about JH’s secret killer robot factory just before the 2007 election.
The press, the truth be damned.
Now where do I have to go to have my concrete shoes fitted?”
To complete this article CALLIGULA has decided to copy the text of the first e-mail warning our bloke of the political Chicanery coming his way.
It is now history that broadcast some tatty stuff about the Brethren which probably caused them more damage than in reality they caused Howard.
Perhaps if they dealt with people in an ethical way they might discover more newsworthy topics in future.
editor@greenswatch.com
Wednesday, 5 September 2007 6:58 PM
Exclusive Brethren Info
Hi,
This is Greens Watch, a site dedicated to holding the Greens to account.
We have been informed that the Greens have been assisting an ABC Four Corners investigation into the Exclusive Brethren and your company has been supplied to them along with "Megatoys".
The ABC person investigating is: "Allison"  0283334869 / 0408495743
A Four Corners Expose will be out in a couple of months.
Please inform relevant people.
Watch out, stay strong and good luck.
Thanks
Greens Watch
Then there is this one dredged up today.
Seems MCClymont is still at it – but that isn’t the point.
This one should stay current for a while to confirm that GreensWatch was right.
(Which doesn’t mean that Larvatus Prodeo was involved. Does it?)
http://larvatusprodeo.net/2007/09/03/mr-18/
I noticed your post concerning “KEEP AUSTRALIA CHRISTIAN
Don’t vote Labour (sic)/Green Coalition” in your letter box. Is there any chance that I could get a copy of this. Also, can you tell me what State you are from?
Regards
Alison McClymont