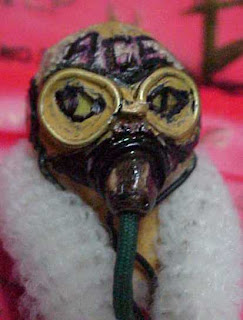 Caption – Ace, armoured against the rarified atmosphere of our politics.
I was beavering away at a letter to an old penpal from Arabee when the door shivered open and this matter was cast down upon my desk.
A NON FARMER has been a bit irate lately because the sugar price has come good and all his FARMER pals are all out motorcycling and water skiing.
I told him to pipe down and think of all those times he got to roar around at breakneck speed while his mates were cutting cane every weekend but it didn’t register.
He reckoned he had as much right to have a say as any bloody liberal.
He stormed out muttering something about the right of the proletariat to have decent scooters too and left me with this task.
I polished it up a tiny bit for him and added a couple of cross references.
Here it is -
.
An open letter to Graham Young
http://www.ambitgambit.com/2010/10/19/why-you-should-be-careful-dealing-with-bob-ward-director-of-communications-for-the-grantham-institute/
Dear Graham,
Firstly, apologies. Upon reviewing my words, moon landing etc., did come across as a bit snide.
Rolling back to your original post and the e-mail traffic copied there.
I’m sure you’d agree that while I read that I don’t possess all the background detail about the topic that’s in your own head.
I have to make do by interpreting what’s written.
What I do have is my own experience of similar situations with all sorts of individuals and organizations here in Oz and internationally.
Would you have me mention that or should I just agree with you?
These days I’m convinced that Oz. has become a very ‘hard’ place populated by a majority of people who’d rather argue that apples were blue than admit the obvious.
Furthermore I contend the same attitude prevails in darts clubs, the corridors of power and just about any place a mix of Australians are put together.
I could relate to you numerous instances of  all sorts of organisations being ‘whiteanted’ to the extent that they effectively ceased performing their original functions.
I every sense they became nothing more than depleted bank accounts being ‘administered’ by klatches of ‘interest conflicted’ people.
Newbie blow-ins with absolutely no interest in the organizations core activities almost inevitably ended up ruling the roost.
Save argument on that subject and read what people are saying about our political parties.
I’ve become convinced that the forced ‘incorporation’ of so many organizations coupled with the continued encroachment of what some innocently call the ‘nanny state’ has ‘Pavloved’ - http://en.wikipedia.org/wiki/Ivan_Pavlov - a whole generation of ‘Kommissars’ - http://antimisandry.com/chit-chat-main/political-correctness-kommissars-7409-post40094.html - into mindsets that have no ‘Laissez faire’ modes whatsoever.
I’m sure it begins in education, becomes enforced in occupation then projects just as negatively into vocation and recreation.
So you see, my view is perhaps different from yours inasmuch as I believe both dart clubs and political parties should act honestly, transparently, humbly and decently.
I know that’s idealism and that is exactly why we should all strive for that ideal.
But as you say there is no room for dissent here and I suspect the reason for that in clubs and political parties is encroaching overarching dishonesty and secrecy right across the board.
In short Australians are now tending to act in their own affairs in like manner to our governments.
What Doug Cameron says (I refer to his words with Lyndal Curtis) absolutely reinforces my view while the ‘dismissal’ of his view by his party leader is only another in a litany of such immensely stupid statements and postures.
I cannot think of anything more infuriating than an ‘elected person’ saying that she ‘rejects’ this or that.
They have no right to ‘reject’ anything.
One week, for instance, Gordon Nuttall was an honoured colleague, a paragon of virtue, pure as driven snow, could do no wrong.
Next week that paragon was offhandedly ‘rejected’ to his fate.
Strikes me JG is picking up similar terminally bad habits from her “Emily’s List” sisters and intends to deploy the same secrecy that lead to Mr. Nuttall’s apparent ‘indiscretion’.
I don’t particularly fancy Mr Abbott as PM but it becomes increasingly likely if labor continues to eschew reform.
Posted by CALLIGULA at 3:00 AM