“SO IF MR. HARGREAVES, BACK THEN, HAD TIED A BOX BROWNIE TO HIS GLIDER MIGHT SOME IRATE BURGHER RUIN HIS AFTERNOONS AEROMODELLING SESSION BY ATTACKING HIM WITH PITCHFORK AND FIREBRAND?”

Today, 16 September, 2012, that ‘Gay Bee Cee’™ mob achieved the pinnacle of abject stupidity.
Undoubtedly they’ll do better in the near future because that’s what their performance curve indicates.
But for the moment their Sunday morning national radio show “backstab and debriefing” about (Oh my Gawd, Martha!) ‘DRONES’, was even better than their attempt, in 2007, to accuse a defence industry firm of making miniature killer robots with the help of the Exclusive Brethren. 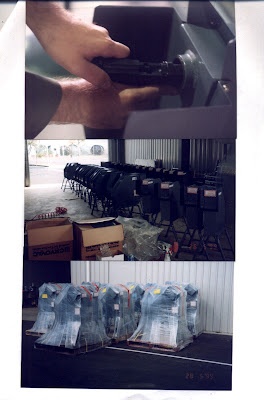 Image – Killer robots according to some who should know better. But as anyone can see, they are indeed metallic, quadrupedal and vaguely animal shaped.
See -  http://calligulashorse.blogspot.com.au/2010/11/something-has-to-give.html - where you’ll discover the truth about killer robots.
To quote the above article –
“We have been informed that the Greens have been assisting an ABC investigation into the Exclusive Brethren and your company has been supplied to them along with "Megatoys".
The ABC person investigating is: "Allison"  0283334869 / 0408495743
A Expose will be out in a couple of months.
Please inform relevant people.
Watch out, stay strong and good luck.”
One wonders what might have motivated them then.
On the face of it a person could be gulled into assuming that dobbing in killer robot manufacturers would be in the vaunted public interest.
Truth of it was that one of their mates (Max McKew, was it?) was standing against dear old Johnny Howard who, allegedly in a fit of desperation, was (futilely as it transpired) receiving bootleg electoral funding from certain religious and ethnic groups.
THAT”S why they wanted the Brethren to be embarrassed and the public interest be hanged!
Okay, okay ridding and Bennelong of Howard was a limited public service but that doesn’t justify mistruth.
Considering that and rolling along to this weekend’s production -
http://www.abc.net.au/radionational/programs/backgroundbriefing/2012-09-16/4254694 - where apparently the contagion (mental/emotional imbalance, politicisation, bribery, corruption, threats, whatever) has spread through the ‘organism’ enough to cause Australia’s best forensic journalists sufficient delusion to have them mistake a technological work of art; an innocent hobby artifact for something alien, threatening and dangerous. 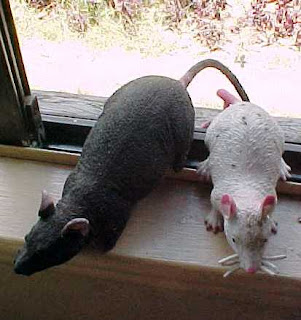 Image – Okay we confess. That other pikkie was of the ballistics traps/unloading devices sold to the Qld porkers to save ‘em from shooting themselves in the foot with their own Glock pistols. But these deadly little suckers in this photo are the real Mc Coy. These are genetically engineered mutant vampire rats which were developed and produced in a top secret, CIA funded, subterranean laboratory deep below the regional “GAy Bee Cee”™ studios in a certain regional Qld town.
Shhh! Don’t tell anyone lest the rats seek out your big toe in the middle of the foggy night.
Posted by CALLIGULA at 9:13 PM