“A Typical Day at the Depot” 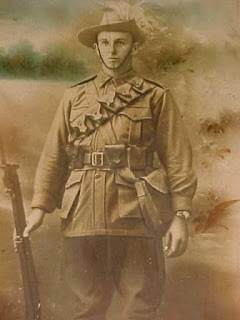 Image – A trooper of the 11th Light Horse. This soldier was wounded in cavalry action near a place called Meggido (Armaggedon) in . He had German parents, so had to pull strings to enlist in the AIF. If he’d been captured he’d most likely been shot as a traitor.
He is the grandfather of the bloke you’ll see below.
Author – Klaus Knoppke  AOB AMEB
This document is about the accountability of (or lack thereof) our governments and the way those supposedly elected to represent us seem disinclined unless, apparently, there is something ‘in it’ for them.
We had to go to a funeral this morning to pay our last respects to the mother of one of our friends. She was an Aboriginal Elder beloved of our community.
While drinking our coffee before heading off we were listening to an ABC news item; an interview with a independent parliamentarian declaring that an ex- colleague of his should be offered immunity from further prosecution pursuant to his testifying against other allegedly corrupt politicians.
Please see - http://www.abc.net.au/news/stories/2010/11/29/3078893.htm?site=brisbane
We listened with some interest while trying our best to understand how far he’d have to search to find a ‘suitable’ judge to chair yet another inquiry.
We wondered what games he was up to this time.
Such speculation was cut short when we had to depart for the funeral but after a pleasant twenty minute drive across town, through the rain, we arrived at the well manicured lawns of the funeral home.
Funerals, for most people are sobering, insightful, events but to arrive at a funeral to find the chapel and atrium full with standing room only out in the misting rain lends a certain solemnity to the occasion of saying farewell to a very special and obviously well loved lady.
All that was as it should be but there amongst the crowd out of the rain under the atrium stood about the only ‘suit’ out in a humid summer’s morning.
Indeed, our corruption fighting politician mentioned above – which in itself is no problem since he’s a perfect right to pay his respects too.
And in any case, no matter how long he’s been avoiding us and what we deem to be his responsibility, a funeral is no place to make a fuss by cornering such a dangerous species as a Queensland politician.
So without causing any fuss we came back to the office for another coffee only to have the NON FARMER burst through the door a few minutes later.
The second he’d arrived back at the office he’d had a phonecall from QBuild enquiring about supply of his weapons clearing stations ostensibly for the Queensland Justice Department.
They wanted one (one off). A ridiculous order - for an item that, by its nature, must be series manufactured – from a regime that knows that perfectly well. 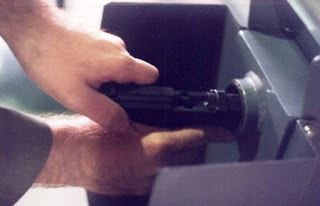 Image – Matthew’s hand. A picture taken for the operating manual for the Qld Police weapons clearing stations. The hand that held that plastic dummy pistol is now still.
He’s been dead for six years thanks to his being mug enough to volunteer his life away.
“Such an easy thing to do is pull a network of ten businesses together every couple of weeks when it suits them just to make a single item – profitable too, I think not.
Do you know; since Matthew died and that Messenger ----- refused to take on board that he was a victim of that hospital – that’s about the fiftieth stupid call from some blonk or other Queensland bureaucrat insisting we drop everything and go broke for their convenience.” – said the NON FARMER.
None of which’ll mean much to the casual reader unless they are of the government procurement/ engineering manufacturing industry – or had read “Ground Zero” -
http://calligulashorse.blogspot.com/2010/10/ground-zero.html
- or like NON FARMER – that plus having been in the situation of seeing what useless, two-faced lying scurrilous bastards our politicians can be -
http://www.robmessenger.com/news/articleprint.asp?action=article&ID=61&pf=true
http://www.robmessenger.com/news/articleprint.asp?action=article&ID=62&pf=true
- as is amply confirmed by comparing  the press statements of our suit-at-the-funeral with how they behave if you need their services.
But the thing that really gets up the NON FARMER”S nose is the pretence that our messenger for justice and right undertakes his activities without favour.
http://www.robmessenger.com/news/default.asp?action=article&ID=474
Anyone reading his articles would believe he has the bone between his teeth on everyone’s behalf -
http://www.theaustralian.com.au/national-affairs/state-politics/aidan-mclindon-and-rob-messenger-quit-queensland-lnp-to-sit-as-independents/story-e6frgczx-1225862487831
- and that apparently now has a team of freedom-fighters, par-excellance.
Except that some now reckon the ‘messenger of justice and right’ is nothing but a grubby, opportunity seeking, mean spirited, amoral charlatan who carefully picks and chooses his ’good works’ for his self-aggrandisement rather than for the benefit of Queenslanders. 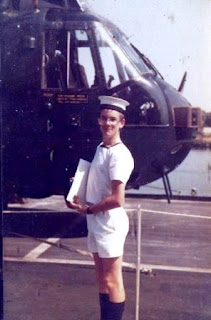 Image – Matthew aboard HMS Illustrious when he was a cadet.
“What I cannot handle is the fact that our first-born son was a victim of that hospital – that he died in late 2004 – and that this ‘fighter for justice’ pretended he didn’t see me at that funeral.
Oh yeah – he pretends to care about the dead – when it might be a public occasion with cameras about – but when it’s private – Naaah – he won’t even take a phonecall!
Don’t for a second believe he’s any better or worse than those of his ex-pals he now calls corrupt.
In my estimation you have to be corrupted beyond recall to gain pre-selection for the ‘grand raffle’ (he means the ballot) anywhere in this country.” 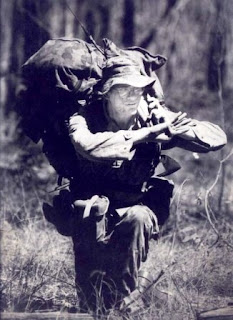 Image – Matthew, Company HQ Sigs – that’s about 100 kilograms hanging off his shoulders
Since this account was drafted we’ve contacted Mr. Messenger’s office twice.
Both times he was ‘unavailable’.
The first occasion we didn’t hear background voice noise – the second – we did.
Someone was home but couldn’t be bothered coming to the phone.
(Yep. We have the same setup at Calligula’s Horse. A small, well ventilated room with a single open topped porcelain THRONE and a sign on the door saying ‘MANAGER’.)
So why not say it here and now –
A reasonable person could only assume that, upon the face of the record, Mr. Messenger has done some good against strong opposition from his colleagues.
That same reasonable person would have difficulty understanding why Mr. Messenger, who seems so keen to continue the battle, wouldn’t want to amass as much ammunition as he could in that circumstance.
We have attempted to provide Mr. Messenger and a number of his parliamentary colleagues our share of that ammunition – information and corroborative documentation.
In Mr. Messenger’s case his non-response has been in an ‘opacity’ class of its own.
It is to his shame that he refuses to listen or take on information when it suits what appears to be nothing more than his prejudice.
If any thing could be said in his support it is that he is dealing with a sort who will countenance anything including deleting the parliamentary record.
Try clicking the hospital inquiry url, here - http://en.wikipedia.org/wiki/Rob_Messenger
Enough noise has been made for long enough now by profoundly knowledgeable and well respected people about corruption in .
http://www.lawyersweekly.com.au/blogs/slide_show/archive/2009/07/29/tony-fitzgerald-lecture-slams-queensland-corruption.aspx
http://www.theaustralian.com.au/news/queensland-has-forgotten-corruption-lessons-tony-fitzgerald-qc-says/story-0-1225755725167
"Access can now be purchased, patronage is dispensed, mates and supporters are appointed and retired politicians exploit their connections to obtain 'success fees' for deals between business and government," Mr Fitzgerald said.

"Neither side of politics is interested in these issues except for short-term political advantage as each enjoys or plots impatiently for its turn at the privileges and opportunities which accompany power."
The amazing thing is that no one in Queensland/Australia seems to give a stuff – a remarkably similar attitude they display to the impending fate of another Queenslander.
Mr. Julian Assange’s experience the last few days –
http://www.theage.com.au/technology/technology-news/assange-wanted-by-us-for-espionage-offences-20101208-18ouj.html
- gives fair indication of the mentality and appreciation of the RULE-OF-LAW displayed by some of the senior decisionmakers in our governments - http://news.smh.com.au/breaking-news-national/wikileaks-acts-may-be-criminal-mcclelland-20101209-18r99.html
- which certainly gives notice as to how whistleblowers and those exposing government dishonesty shall be dealt with in future.
And while some, even in the , can see the truth and speak plainly -
http://www.economist.com/blogs/democracyinamerica/2010/12/after_secrets
“Some of us wish to encourage in individuals the sense of justice which would embolden them to challenge the institutions that control our fate by bringing their secrets to light.”
- others elsewhere in play the same game of selective deafness as is institutionalized in
http://www.abc.net.au/news/stories/2010/12/09/3089510.htm?section=justin "I believe the Prime Minister is showing a contempt for the rule of law - the way she has ruled out the presumption of innocence and instead there seems to be a presumption of guilt when it comes to Mr Assange," Mr Wilkie said.
Which is good of Mr. Wilkie and undoubtedly good press.
Conclusion –
Messrs. Messenger and Wilkie are independent politicians.
Both present as upholders of rightness and truth and take pains to ensure that the press maintain that as their image.
The difference A NON FARMER has noticed between these two men is that the fighter for justice and right flat refuses to communicate with him while his Federal opposite number had invited A NON FARMER to forward representations to his office.
That was accomplished months ago.
The one and only result is copied here –
Desr -------------
I can’t open the attachments to this email in their current zipped format.  Could you please re-send in another format?
Thankyou.
-------------------------
Office of Andrew Wilkie MP
Independent Member for
(
7000 / GPO 7001
(02) 32774766
MOBILE             0418 169 490
EMAIL                --------------- at aph.gov.au
This document is by way of an open letter to all those independent politicians who pretend to be reformers.
It would be good if one or two of them acted at least as vociferously in the interest of Australian citizens as they pretend to do for celebrities and outsiders in their opportunistic scuffle for the main chance.
Posted by CALLIGULA at 12:28 AM