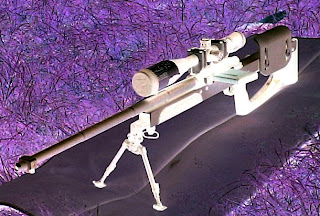 Some years ago the owner of an Australian defence research and development business sent what is called a ‘ministerial’ along to the, then, Australian defence minister, Peter Reith - http://en.wikipedia.org/wiki/Peter_Reith
.
The paper was specifically compiled to refute statements (excuses) emanating from the Defence Materiel Organisation to the effect that in their opinion there was no capacity, capability or skills base able to meet certain defence procurement projects then on the books.
At the time this document was created the business had made enough headway to develop a product line of 100% Australian design and content that was fully compliant with defence specification and remarkably superior in accuracy and performance over published defence requirement.
Their services had also been solicited by a certain state police force to invent a product that would serve to eliminate the possibility of officers accidentally shooting themselves and their colleagues with their new Glock pistols.
(Most readers, who need cheering up, might not be aware that the Glock lacks a dedicated safety catch, They are an offensive, not defensive, weapon.)
Since this force had already purchased and placed into service a couple of hundred of these devices (weapons clearing stations as the cops called them) our proprietor decided to include their information in the ‘ministerial’.
The content of the document?
Oh, nothing that Mr. Reith as a profoundly knowledgeable and dedicated defence minister wouldn’t already know.
Stuff like – We are firm A, situated here; you can contact us by – and see our web page here.
It went on to advise – these are our projects a,b,c,d,e, etc – and our sales to the Commonwealth, to this state government, to these defence approved export costomers 1,2,3,4, etc. (all quite an interesting and information rich document)
Then relying upon and quoting from a document called the “Defence Procurement policy Manual” it indicated the ways and means by which the firm was required to ‘engage’ with defence as a ‘valued and respected defence asset’.
All that was illustrated with pikkies of the equipment including the item shown above.
If Reith actually ever did read the document there was one part that might have burred him up.
That was where it was politely put to the minister that certain initiatives contained in the procurement manual, underpinned by legislation, in support of indigenous Australian industry were being denied; that therefore his office was, in the strongest sense, evidently breaking law.
At this remove I can’t remember if words like Tenix and conflict of interest were used then.
I suppose if you’ve read this far you’d like to know if our boss had any feedback from the minister?
Some might say –“ What: from Reith?”
And they’d be right. The usual process would be that a response addressing each and every matter put to the minister would be sent to the deponent.
But not Reith.
Indeed there was a letter from Reith’s office to the local member of which a copy was finally wrested from his grip.
It regretted to inform his pal in politics that despite looking everywhere (probably under his desk) the minister couldn’t find anyone other than Tenix, ADI, Boeing, GDLS, BAE doing defence stuff in Oz.
Oh, by the way, it went on to add, we don’t want any of those weapons cleaning stations thingumys built either.
Which is strange because I’ve seen the e-mails from HMS Cairns to the boss inquiring about the possibility of their installation in the new patrol vessels.
But, true to his promise Mr. Reith took care of that.
How do I know this?
I wrote some of the manuals and took some of the pikkies of some of this gear both for publicity and for demonstration purposes.
I have been allowed access to some of this material for historical purposes; if it can be put that way.
So, in the historical sense what did Reith’s actions achieve?
For himself, a job for a while with Tenix -
http://www.smh.com.au/articles/2002/08/26/1030053035440.html
And I suppose he set the tone for those who followed him in the ministry.
As for our small regional defence firm who developed equipment of a sort that can only be acquired by government; who developed their product to a stage that exceeded every element of the defence compiled specification?
Oh, they are all right. They’re broke. The same police whose lives they protected thanked them by staging a home invasion and stealing their project inventory.
That’s their reward for supporting the defence of .
Meanwhile Australian soldiers are bypassing the chain of command and being admonished for stating the obvious and to the best of our knowledge our Naval boarding partys still lack a safe means of check loading and unloading their weapons.
But that’s only one tiny little corner of the Reith defence legacy.
I’m sure there are many other similar stories out there.
Almost forgot. Why is that pikkie a funny colour?
Oh. It did mention on that page in the ministerial that the rifle had mission/ environment adaptive camouflage; a non specular surface finish that was nonetheless readily decontaminated of NBC agents.
It also hinted that this feature alone would be worth millions in, say, the .
The best way to illustrate that to a politician was to move the lighting along the UV end of the spectrum in that photo.
But we can’t have Aussies playing with stuff like that, can we.
Nope. Do that and we might have some new industry.
Posted by CALLIGULA at 12:35 AM