“What are you bellyaching about this time?”

Calligula’s Horse –
So what are you bellyaching about this time?
Benjie Capuzzo -
“Put it this way. The great OzGovernment has hit on a way to save doing anything at all on behalf of its citizens.
As well as sacking every employee at the first sign of honesty or display of conscience they’ve put in these call centres allegedly for a one stop shopping approach to agencies and services.
Actually it’s a great way of creating ‘complaint fatigue’™ while also completely destroying the last vestige of motivation amongst all those underemployed and life experience disadvantaged young adults those call centres exploit then dispose of without any qualms whatsoever.”
http://www.theaustralian.com.au/national-affairs/state-politics/insurers-accused-on-early-rejection-of-flood-claims/story-e6frgczx-1226148481981 - which is how the mainstream put it
CH – Now you mention it the ‘ of the Two Speed Economy’ does seem a little short of helpful contacts and information these days.
BC – “A little short – is that what you call it?
Take a look at this pikkie. Now, according to a certain nazi type fresh out of the land of the Long White Cloud – this animal is a rat.
While everyone knows that has become a joke surely the manual of corporate governance could be sourced elsewhere than from a ‘Dilbert’ comic book?”

Image – The rat. Despite the fact that the animal has been identified as a possum, a protected species here in Qld, this animal has been deemed ‘a rat’ and the house it has adopted has been declared ‘a vermin infested hovel fit only for demolition’ by an insurance assessor of dubious ability but of evident overseas extraction.
﻿
BC cont. - “Everyone knows that New Zealanders are crazy and can’t tell the difference between a possum and a rat even on a good day - but that’s no reason to let ‘em emigrate to Oz and take up work as insurance assessors here in God’s Own Country.
Maybe that stupid television fiasco many years ago set in and all about a timber town had every Kiwi and his dog (or should that be sheep?) represented as the ne plus ultra chippie.
Stands to reason don’t it – in the same way that we still have Poms and the bloody Scotch as foremen and union organizers – after all their sort are better than us, aren’t they?
Maybe that combined with the fact that being a chippie, a carpenter – though probably a failed carpenter in his homeland – somehow lends him the status of another carpenter, that pesky Joshua bar Joseph.”
CH – Hoo boy – bellyache. What the hell has carpentry  and JC himself got to do with call centres and governance?
BC -  “Simplissimo, Charlie Horse, if you shut up and listen for a few secs.
You really are as bad as those brats in the call centres – no lateral thinking and no ability to accept that life ain’t a straight line.
Now consider – if some insurance company is bought out by German interests a while ago they probably expected projected climate change trends to improve their profitability in .
But of course the drought broke as we Aussies knew it would so these Krauts, these absentee investors in insurance decided to utilise standover tactics when the flooding began.
Unprecedented claims arising from the Christmas/new year flooding have been met with bastardry and the sort of frustrating obfuscation that has been refined to an art form by those who pretend to serve our society.
So if anyone is wondering what Christmas, carpenters in new jobs, possums, rats and brain-dead bloody incompetent public servants have in common they’ll have to think about it for a while.”
CH – Oh I get it Benjie.
You mean Christmas and the carpenter. What is ordinarily supposed to be a time of good will between men – emotionally juxtaposed with the concept of our good Lord Gentle Jesus who apparently was a carpenter himself before that famous career change in his life.
You infer that not only was the season ruined for so many by the forces of nature but that such misfortune was compounded by some other ex-carpenter or other; one so debased as to be acting almost in the manner of an anti-christ  - In fact acting callously and dishonestly toward vulnerable people in the worst sort of distress.
And more to the point this dropkick was treating dishonestly with people who had shelled out good money in the fair expectation of decency and fair dealing when the times are bad – stuffing about with those who had paid their dues.
Yeah Benjie, I’m with you now. Indeed you are spot on.
The accents change over the years but the same game of exploitation and divide and conquer keeps being played at every level.
But back to call centres. Open up about that please.
BC – “Okay then. What do you do if protected animals have invaded your ceilings and are chewing holes everywhere?
Firstly it began happening after a state government project nearby located a complex electrical installation under flood level.
Meanwhile improperly carried out ancillary work to do with that project displaced wildlife and caused rainwater retention on certain nearby properties. 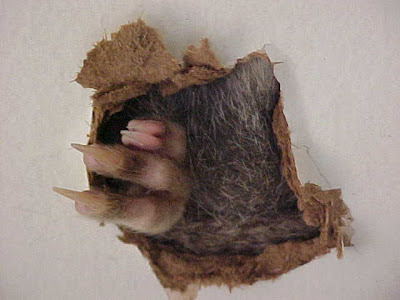 Image – High tech rat switches on cloaking device before ripping through ceiling
A reasonable response to that would be to call on the State to repair the damage and demand they pay compensation for the detriment caused.”
CH - And how does a person progress with that task?
BC – “By contacting those numerous agencies indicated as of jurisdiction through the officially nominated appropriate contact points – then screaming blue murder.”
CH - And what outcomes result?
BC – “Don’t be bloody patronizing In the famous words of another carpenter, Grant Harrison – ‘We Aussies are a funny lot. In other parts of the world when injustice and unreasonableness become intolerable the people march and call up bloody revolution. While that’s happening everywhere else we Aussies phone up a friend and have a good bellyache.’
For all the good ‘progressing complaint and feedback through appropriate channels’ does we Aussies we might as well give up and just give our pals the shits by constantly whingeing.
But change is happening – population, demographics and attitudinal change is happening at an accelerating pace and the eternal fob-off will cease working very soon.
Naturally the only response we’ll see from our masters is more paranoia and coppers that look and act more like Judge Dredd every day.”﻿
Posted by CALLIGULA at 11:09 PM